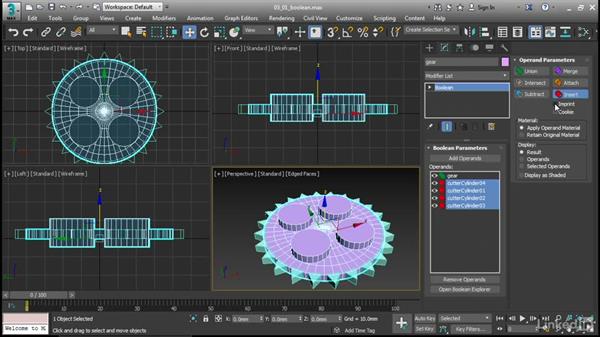 - [Voiceover] In our chapter on modeling an animation our first topic will be the new Boolean tool. If you're not familiar with Booleans, it's a manner for combining 3D objects. You can, for example, use an object to cut a hole in another, or you can attach two objects together and remove the interior geometry and create a watertight, or seamless object. If you have used Booleans before you probably know that they're a little bit tricky. If you have any issues with your topology it could result in the Boolean operation just failing. You need to make sure that you have enough level of detail on your objects to perform the operation.

You still do need to prep your objects in this manner with the new Boolean. The algorithm under the hood has not really been improved, but the interface has been improved and we have new abilities that we couldn't do with the old Booleans. To create a Boolean object select one of the objects in your scene, and that's gonna be the first operand. That's a little bit of a special operand. You would usually choose the largest object. And then go into the create panel, and in the categories choose compound objects, and if a valid object is selected you can click Boolean, and it's created.

You can directly go to the create panel and start adding more operands, but I advise that you jump over to the modify panel right away. I'm gonna expand the command panel here. Get us a little bit more on the screen. And to add operands just click the add operands button and let's add these four blue cutter cylinders here. Just click on each one of those in succession. Once they've been added we can change their operation type up here. The default is union, which will combine the objects and remove any interior geometry, creating a watertight, or sealed mesh.

We could also subtract. Click on subtract and we've just subtracted that one object, but we could select these others as well. Hold down the Shift key and select, and then click subtract. And that's fine, pretty cool. Let's use the Shift key to select all of these cutter cylinder objects and try out some of these other options up here. Merge will combine all the parts and create new edges at the joints, but it doesn't delete any of the interior faces. And you can see the difference if I switch between union and merge.

It's especially evident here in the top view what's going on. Okay, so merge is really just creating new edges. Then we have the attach operation. And that's the same as the attach command in editable poly. It simply combines the parts and doesn't change any of their topology, so no new edges are created anywhere. Insert is a little bit special. And what it does is it cuts holes, but it also leaves the current operand visible, it doesn't delete the faces.

So what it's doing in this case is it's subtracting from the main cylinder or disc here, but not erasing these other pieces. And we really can't see that well right now, what's going on. Let me make a duplicate of that object, so we can analyze it. I'll grab the move tool, and then hold down the Shift key to make a duplicate, and it's gonna be a copy, and then convert it to editable poly. Right-click, and convert to, convert to editable poly.

Once that's done we can actually select by element. And this will hopefully illustrate what the insert function does. It's actually a very cool function. Again, what insert does is it keeps the current operand, but subtracts from the other operands. So we can make parts that fit into each other. Alright, cool, so I'm gonna delete that duplicate now that I've shown you what insert does. Back on our Boolean object, just a couple other things. What is imprint? It simply slices new edges where the current operand intersects and it deletes the faces of the current operand.

And it's really only relevant for certain types of operations. If we have union or subtract or intersect or merge selected and we choose imprint it's gonna do the same thing in all those cases. It's just drawing new edges here where the two surfaces met. Imprint has no effect on the attach type. If you use insert and imprint together then it's going to slice new edges, but it does not delete the current operand's faces.

It's a little bit hard to illustrate here. I could, once again, make a duplicate, hold down Shift and drag, make a copy. And then right-click and convert that copy to editable poly. Then in element mode we can select one of these and move it. And as I said, what it does is it creates new edges, but it doesn't delete the original operand. Those are the different operation types, except we didn't look at one, which is intersect. I'll turn imprint back off again.

And with those four cylinders selected choose intersect. And we see a curious result, which is apparently everything has disappeared. What's happening here is that we're trying to find the overlapping volume, but none of these objects actually overlap with one another. To make it clear how intersect works I'm gonna set three of these to a union and just this one to intersect, so we can see what it's doing. It's finding the overlapping volume between itself and everything else. But if we have all of these set to intersect then if they don't overlap or touch one another then we won't see any result on the screen.

Just to illustrate, I can make another one of these cylinders an intersection and then move it, and there are a couple different ways to move it around. Really the easiest way is to double-click here. What that does is puts you into a sub-object mode here, and it also selects that sub-object. And since I've got the move tool selected my move gizmo is positioned there. Here in the display section I can turn on display operands or display selected operands.

This is gonna be the easiest way for me to illustrate my point here. I can double-click to select one of these guys and then move it and you'll see where it overlaps with its neighbor we get an intersection. Alright, cool. So I'm gonna undo that movement, just restore it back to where it was. If we wanted to find the intersection of all of those objects, so that wherever they overlapped with the main disc we would have smaller discs, then that would be a good case for creating a sub-Boolean.

Let's look at that. To make a sub-Boolean you go over to the modify panel and select one of the objects that you want to be a member of this sub-Boolean. And that's basically like parentheses in an algebraic equation. You're saying we wanna isolate this operation and perform it before we do any other operations. So I've got one of these cutter cylinders selected and then right-click and choose create new Boolean. Now I've got a sub-Boolean and I can drag these other ones one at a time into that.

Once I've done that then all of these inside the sub-Boolean I can set to a union, and then the sub-Boolean itself I can set to intersect, and now I've got what I've wanted. Alright, I don't need to see the selected operands anymore, so I can turn that off. Cool, so that's how we can change the order of operations. We can say we want all of these cutter cylinders to be union together, or combined together, and then that as a unit subtracted, or intersected from the main gear.

Okay, what I actually really want here is to subtract. And then finally we can add the rest of these really easily. There's a new window, which makes it easier for us to do that. And that is the Boolean explorer and we'll look at that in the next movie. 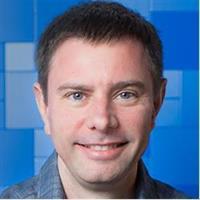 4/18/2016
What's new in 3ds Max 2017? The new user interface is key: flatter and faster than before. 3ds Max 2017 also introduces the Autodesk Raytracer (ART), a physically based renderer for photorealistic stills. Aaron F. Ross covers these features plus many others, explaining what to expect and how to use the new asset management, modeling, animation, materials, and rendering tools.
Topics include: