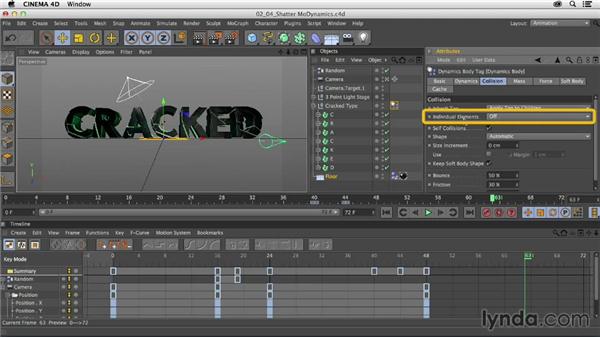 Now just to check in with the progress of our project, let's go ahead and watch the animation. Let's go to the start of the animation and press the Play button. So we have our animated fracture happen but the text hasn't started falling to the ground yet. So we need to actually animate the dynamics within the scene. And we'll do that by making adjustments to the dynamic body tag here. So make sure your dynamic body tag is selected next to Crack Type and then go up to the Dynamics section in the Attributes manager.

If your interface doesn't look like this make sure you're in the Animation layout in the upper right corner. Okay, now under Dynamics, you want to make sure the trigger is not set at Velocity Peak, because we don't have any velocity changes yet. So nothing is going to start animating. Let's change the Trigger to Immediately. Then go back to the beginning and press Play. Well, that's not quite right. So let's move back to the beginning here and you'll notice when we press Play, the dynamics have already started being applied before the cameras even hit the letter.

So, we need to control how that actually happens and we can do that by making an adjustment to the Force section. Under Force, this will allow us to control how the key frames blend between the animation we've already key framed in our timeline versus the animation that is being created by the Dynamics body tag. So the higher these numbers, the more Cinema is going to look at the key frames we've already created. The lower the numbers, the more it's just going to use the Dynamics to create the animation.

And Cmd+click one more time to set another key frame. Now, if we go back to the beginning, you'll notice the text isn't moving and then it gets slammed by the camera. And then it starts to fall out of the scene which is exactly what we want. I'll go ahead and play that back again. This is kind of it in a nutshell. Problem is it's not hitting the floor. It's just in a constant state of free fall. So what we need to do, is go back to frame zero, select the floor and then right-click. Go to Simulation Tags and add a Collider Body tag.

This will allow us to set this as the object that these pieces will collide into. Now we can leave this set to it's default settings and let's go back and watch the animation one more time. Well, that's close, but it's not quite it. It's actually falling but the individual pieces aren't shattering into individual pieces. They are staying letters. So, let's look at how we could make more adjustments to our Dynamics Body tag. If we go back to the Dynamics section up here we have the trigger set to happen immediately which is fine for now.

But if we go to the Collision section notice our inherit tag is set to apply to the children but the individual elements are off. Let's go ahead and change that to All. Now this will apply through all of the different levels, not just the top level. So if we rewind this back, you'll see now we actually have things happening and then when it falls all the individual pieces are breaking apart, which is great. But you notice also now the letters are starting to move immediately, and even though they aren't falling, they've definitely shattered and started moving before our camera has hit.

So let's go back to the Force section here. We have Follow Position set up to ten. That's why they're not changing in their position, but their rotation is changing. Now, I could animate Follow Rotation but I actually want a little bit of wiggle to happen here. So what I'm going to adjust is the Damping. This kind of softens the blend between the two. So let's move to frame 40 and change the Linear Damping up to ten and we'll change the Angular Damping up to ten.

So, linear is how things move in an X-Y fashion. Angular allows you to control rotation. So let's say you animated a ball rolling down the street. If you increase the angular damping it will blend how that ball rolls and eventually cause it to stop. Okay, so let's add a key frame for each one of those on frame 40, so I'm going to Cmd+click and then we'll move to frame 44. And crank that value down to zero and Cmd+click. Now the other issue with this is the fact that it's actually still starting at the beginning.

And you would think since I've adjusted the Damping and some of the Follow Position that this wouldn't happen. Now, you would think I would just adjust the Follow Rotation but that's not quite it. See when you're working with Dynamics inside of Cinema, it's always computing the dynamics in the scene. Now when we initially set the Dynamics to trigger at a Velocity Peak, there was no change in velocity, but since we've adjusted the Force sections, under Follow Position in the Damping, now we actually have some velocity changes.

So I want the trigger, not to happen immediately, but at the Velocity Peak, which is going to peak during this 40 to 44 frame section. So if we go back to the beginning and go ahead and press Play, when the camera slams into the letters they'll shatter and then start to fall apart. So we've successfully kind of tweaked this animation here a little bit just by adjusting the Force settings. We adjusted the Position and the Damping but that allowed us to actually go back and change the Trigger for those Dynamics.

So now they don't actually start to fall to the floor until we have those adjustments in the Force. So whenever you're working within Dynamics inside of Cinema 4D, you want to make sure to pay attention to how all of these elements play nicely together. You also want to make sure that you have the proper different tags applied to the different elements so that Cinema can kind of go through its computation and figure things out. Now, of course, there are many other things that we're going to do to continue polishing things, but I hope you can see just how powerful Dynamic body tags are.

And when you use the Force section, you can really control how the blend happens between the Dynamics and the key frames you may have already created in your animation. 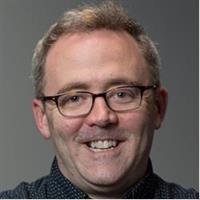 1/14/2014
Clients want dynamic type that shatters, glows, and smokes. Type that explodes and knocks over the camera! Learn how to create this dynamic effect by combining CINEMA 4D render passes with some fine-tuning in After Effects. Ian Robinson shows how to model your type in C4D, fracture the text with the Random effector, shatter the letters with MoDynamics, and use the render passes to create glows in After Effects—without the use of global illumination. Plus, you'll learn how to use particle animation to make your text "smoke."
Topics include: