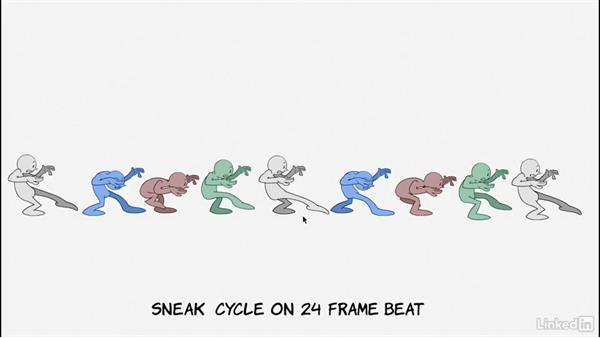 [Voiceover] Let's take a look at one of the trickier custom walks, and that's the sneak, and I remember when I saw this in the old Preston-Blair animation book. I saw it, and I saw kind of how he went about doing it, but honestly I don't know that I could have done it based on just the images alone, so I'm going to try to break down the procedure a little bit for you to give you a fighting chance at getting close to this. So the first thing to remember is it begins and ends with a contact pose. You have to have good contact poses, and the contact pose should say sneak, otherwise there's no point in starting.

So this is a pretty good standard, basic you know, little tip-toe. He doesn't want to wake up granny or whatever. So let's begin, and I'll show you how we start. So here is the first contact, second contact, and then we cycle back into the first contact. So let's just proceed, and pull out, and there's our passing positions. So it's the passing position in collaboration really with the contact that helps us to do a couple of things here. Stay in balance, he can't possibly take his weight off this back leg without falling on the ground.

No walk that you can do holding that position is going to stay in balance, so you have to get him down, get his weight over this foot, otherwise splat, and it's not going to work. So same obviously goes for the other passing position, and we're bringing him down into a nice arced curve, something like that. So let's have a look at the next step, which is pulling out again, and it'll be the, this is kind of a down position really, but it's kind of mushing all into one kind of arced, little kidney bean kind of shaped arc path, so the main thing to take from this is that this foot, which is now tipping, has very gently just laid down on the ground, and we're keeping the upper body not doing anything too drastic, because again, he's trying to be quiet, so he wants to keep in that posture, and if you're ever in any doubt, if you're thinking on the page, get out of your chair, and try to act this out and you'll see, oh wait a minute, nobody does that when they sneak, and your body will tell you what the right gesture is.

So let's go to the next one, and this is when he is still floating in the air prior to tip-toeing on the ground. And there's really not too much drastic going on here. The high point is barely even a high point, I think that's actually even just like a glorified breakdown or in-between between the passing and the contact. So overall, it's a very smooth action. And the other thing to note, this is a 24 frame cycle, not 12. It will be quite fast if we played this on 12 frames. I doubled it, and that's a fairly common thing to do for a sneak, you slow down and again, you don't just mechanically apply this magical 12 frame beat to everything.

So this is a halved, and you could go maybe slower, it just depends on what your needs are and if you can get away with it, but this'll work for you. They're also evenly spaced. Interesting thing about this, I didn't use any slow-ins or slow-outs on it, I just had one very even spaced motion, which I think gives it a nice flowy feel. So let's move on to the next part, which is to take all of these drawings and just see what our extremes look like when we play them in sequence before we... In the old days we would then draw many, many in-betweens to make this work, so you'd want to make sure these drawings were absolutely what you wanted, and we would look at, this is called a pose test.

Now of course today, as I said in the previous movie now we have the, most of us anyway, computers that'll do these 'tweens for us mechanically, but it's very important to be able to, like I said, plot your arcs, or at least have some idea of what the arcs are going to be. So let's, before we go any farther, take one more look at this. Doesn't seem to defy physics, I think he's OK. So let's go into the actual scene itself. And what I'm going to do now is show you some of the work process that I do when I'm laying this out, because I know it can be really, really overwhelming.

Let me switch the arm off. I have the artwork here on layers because it's easier to demonstrate it if I can switch elements on and off. So what we have here is, well the arm's gone, so this really focuses our mind on the basics of the walk, and if I can get this thing to work purely in this form, I know it's going to work and I don't... And then I can go in and proceed to do the time and the heavy labor with the arms and the various legs and the elbows and all the rest of it. If this doesn't work nothing else will work.

But I think that's pretty nice. And the other thing I want to point out to you is the guide path for the head, which is a series of arcs, and as you can see, it's making a beautiful little kidney bean. And that I think largely is one of the reasons that we're getting this lovely sneaky sense, because it's just up and looping and over, and it's not doing anything jaggy or edged. So the whole thing is like this dream-like smooth motion. So now I'll take a look at the full scene.

Now there's always room for improvement. For example, I think right at the top here there might be a little bit of a, just a little bit of a pop, very subtle, though. And I could probably soften some of this motion on the arms, maybe drag the arms a little bit. So I'm pointing this out just to show to you there's always areas where you can go in and tweak and tweak and tweak, but it's also important to know when to let go. So let me show you then what this looks like when we pan him across the screen.

Sometimes too, if you have these little artifacts, they might be present in the panned walk or they might not. Mistakes can come in, but sometimes they can be erased too. It's always very strange to me when you see these two variants of your same identical animation. So that's our sneak cycle, let's move on to the next one. 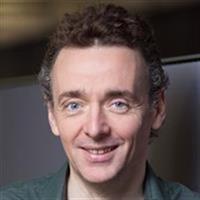 4/7/2016
Once you've completed a basic walk cycle, it's time to add character. Animator Dermot O' Connor shows how to take a basic walk and go beyond, building in personality, exaggeration, and attitude. Learn how to animate bipedal motion, stomps, sneaks, and goofy walks, and turn walks into full-on runs. Dermot also shows how to avoid common pitfalls such as jagged arcs. These techniques are 2D animation classics, and must-have skills for any animator, regardless of software.
Topics include: