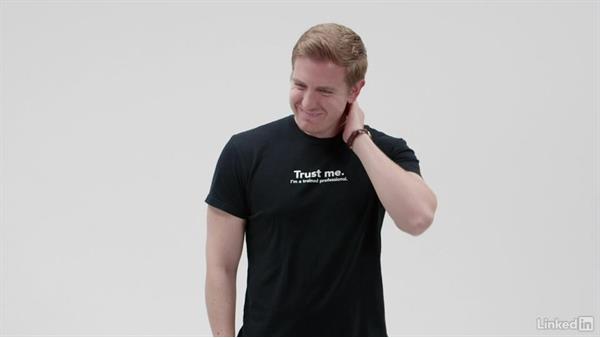 - Now, we're gonna talk a little bit about cliche gestures. Cliche gestures are gestures that have been used so many times that they've become a cliche. A cliche is an essence, an idea that was so good that people just kept using it over and over, it almost it cannibalized itself. You see this a lot in animation. The classic gestures like the point, or the neck rub or the W-gesture. Let's take a look at our actors and see what they did, and then we're gonna go over each clip and see why it's a cliche.

Right, here's the classic W-gesture. You wanna stay far away from this. It's a symmetrical gesture that looks like a W. One of the most overused gestures in animation. Then, you've got the classic looking at your watch, what time is it? You know, how many different ways can you tell somebody what time it is? Yes, it's important to look at your wrist for that kind of information but there are very interesting ways of doing that.

The classic, oh I'm gonna get you point, right? Again, we wanna stay away from the most obvious choice. The hand on the back of the neck is also one of the used gestures. Great story, we were in dailies one day looking at a shot of Woody delivering a line and the animator had him having his hand go on the back of his neck. So, we tried saying to the animator, hey, why don't we just take it out, let's see what it looks like if we just take it out.

Nobody missed it, the shot looked great, it ended up being much more powerful without that classic neck rub, I'm feeling really nervous type of gesture. So, when in doubt, take it out. Okay, the hair flip. So, you can see there's all these different ways of doing things, right? The classic hands on hips gesture, the foot tap, right? It's okay to tap your foot but again, you're always looking for ways, how do I do that gesture differently? Let's take a look at our other actor, Dylan, and see how he did the same gestures.

Neck rub, this one actually doesn't work too badly but again, it's something to stay away from. What is another way of showing somebody that has a little anxiety or is uneasy about something? The hand on the back of the head. Originally, this gesture originated in a film called The Jungle Book where one of the animators had saw his buddy in the army do something where he did something on the back of his neck and then scratched his chest.

So he thought, that would be a great idea for a scene I'm doing. The problem was, that's that people kept doing it over and over. His great idea turned into a cliche because it was cannibalized. You don't wanna look at other animation for use of gestures. You always wanna go back to yourself or an experience or some video you shot or a a great film. So, just be careful about looking at animation for gesture reference because that somebody else's idea of how they got that on the screen.

Hand on chin, you know, all of these are great gestures, and I wouldn't say they are necessarily cliches, we are just looking for the best choice of whatever you do. Let's take into account maybe say, a character looking at their watch. How many different ways can you look at your watch, right? That's one way, that's another, that's another. Now, let's take a look at somebody in a film looking at it. What I love about this scene is how he kinda goes out first, he goes out, first pose is kinda out here, then, it comes back in.

So, it's really interesting how he does that watch-looking. So, what I love about this clip is the specificity that the actor takes of how he looks at the watch, right? He goes in and out, right? It's different. Specificity is something in animation that is key. You really have to be specific about about the gestures that you have your characters doing. You're making something different and you're not doing it the same way that we've seen it over and over again.

So, be specific and it's gonna make your character animation all that much better. 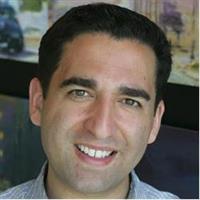