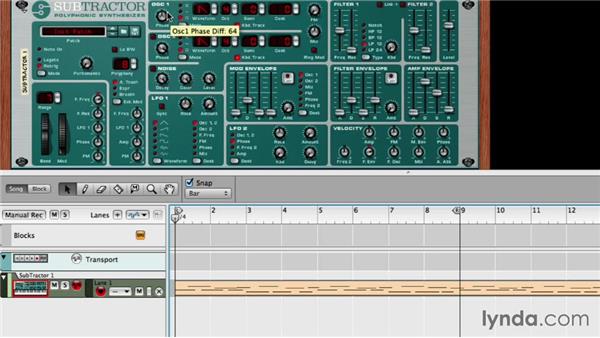 As we've discovered oscillators which are capable of generating sine, square, triangle and sawtooth wave forms are at the heart of a lot of synth instruments. In this movie, we'll see where they live and their favorite scents. And while we're still on the topic of additive synthesis, we'll look at some other tricks you can use when we combine oscillators. So let's open up a synth sequence in Logic Pro, Reason, and Pro Tools and we'll check out the oscillator section of synths in these programs. In Logic, the new retro-synth instrument has oscillators to make some of the wave forms we discussed.

And if I go over to oscillator two we hear the triangle wave. It's a little mellower. And then we have our sawtooth wave again. And our square wave. And of course you can blend the two together depending on where this slider is. Now, let's go over to Pro Tools, and here in Pro Tools, it ships with the Air instrument called vacuum. It's also an analogue two iscillator type synth, with the added twist of having a tube emulation circuit, which is why the iscillators are labeled VTO1 and VTO2.

This is the mixer here, and we can mix together VTO1 and VTO2. I'll take VTO2 all the way down for starters, and I'll play back that same sequence, and I'm going to move between the waveform shapes. So I'll start with a sawtooth wave. And move into the triangle direction. Triangle is a kind of mellower sound, as you hear. And as I move over to the square you start hearing that more hollow square wave sound. Okay, and VTO2 has the same waveform shaped square and saw, although it has a noise Function here which is interesting and noise is basically just all frequencies at once.

So if I turn off VTO1 turn on VTO2, I'll start with noise and you'll hear that it sounds like tv static and then I'll move in sawtooth wave and square waves. That's the noise. Here's our sawtooth. Heard that before and here's our square wave. So those are the oscillators as we know them on the vacuum tube synth here. And I want to go over to reason and show you that in reason subtractor we also have two oscillators. Oscillator 1 and oscillator 2.

And all the familiar waveforms are possible. So, starting at the default, you get the sawtooth wave as indicated by the shape here. Again, they don't say explicitly sawtooth wave, but that's what it is. Let's listen to that. So I'm going to go over to Play that sequence through, and I'm going to turn off oscillator two. For now we hear just oscillator one. And here's that same sequence, this is with just the sawtooth wave alone sounds like in Sub Tractor. And I can move over to square wave.

Again it's that hallow square wave sound we're used to. Triangle which again, is more mellow sound. And subtractor even lets you have a sine wave. Which is going to be the most mellow sound because remember, sine wave is only one fundamental frequency and no upper harmonics. So we don't get any of that richness we get with something like the sawtooth wave. Or square wave. Now I can blend in oscillator two and now we're hearing, with this mix nob here, a mix between the two. And we're hearing a square and a sawtooth wave.

So, now that we know where these oscillators live on these synthesizer. I want to show you two interesting techniques when you combine oscillators. First, even if you have the Oscillator set to the same waveform, so for example, if I have Oscillator One, and Oscillator Two, both set to a square wave, you can slightly de-tune one of the Oscillators. And you'll get a beating kind of chorusy effect. This can be used to widen and add some substance to your sound.

So in Subtractor we can detune a whole octave or semitones But, we can also detune using the cent value, which is a very slight pitch value. It's a subdivision of a semitone. So if I detune oscillator 2, say something on the order of 4 cents. You're going to hear a slight widening of the tone. So let me start at the beginning of the sequence and I'll start at zero so you'll hear basically Just two square waves working together. I'm going to detune oscillator 2 and notice the sonic difference.

Go all the way to five cents. So just a slight detuning from here kind of makes it sound more interesting. If you like the way that that chorusy effect works. Another technique you can use when you combine two oscillators, and a subtractor allows you to do this, is to actually change the phase relationship between the waveforms. That sounds complicated. But, all phase is, is just where the waveform starts. So, right now, they're both starting at the same place and we hear them together. But if I take oscillator 2 to the minus position, I have this phase knob.

And listen when I move the phase number around. You're actually just moving where the second oscillator starts, in conjunction with the first oscillator. So here we go. So it's a little more subtle than the detuning, but you could hear the tone changing, and really all you're doing here is again you're altering where the cycle of one of the wave forms begins. And the result is that some harmonics are emphasized and others are canceled, creating some interesting tones as you do it.

Probably hear more if we move down an octave. Now I'll just keep the waveforms the same, and I'll move it again. I'll just, it'll probably be more obvious in a lower register. So let's hear it now. Now when I go back to the retro instrument, and of course, beyond just these two techniques you're free to choose any combination of waveforms and add them together in varying degrees. So in other words, we can add together a slightly altered sine wave with a triangle wave. We can de-tune it here, just like we did in Subtractor.

And we can blend the mix between the two oscillators, and we can kind of tweak those parameters until we get a sound we like. So that includes our section on additive synthesis, where we're dealing with adding oscillators together to create synth tones. In the next few movies, we'll switch over to discussing something called subtractive synthesis, where we're actually removing information of the tones we make with filters and envelopes. 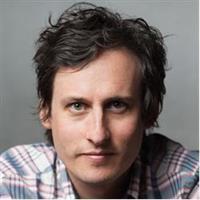 3/7/2014
Early modular synthesizers that once took up entire rooms are now available at our fingertips with modern DAWs. Though software synths often use the same knobs and sliders as the originals, all the controls can be confusing. But you can crack the code of programming synths with these tutorials from sound designer and engineer Scott Hirsch. Learn about the building blocks of synthesis (sine waves) and how you can build more complex tones with additive synthesis. Then discover how to sculpt your sound with filters and envelopes and create a number of example synth sounds, including a synth lead, a rich pad, a drum sound, and a synth bass. Along the way, Scott shares specific techniques for synth programming using the AIR Vacuum synth in Pro Tools, Reason's Subtractor, and Retro Synth in Logic Pro.