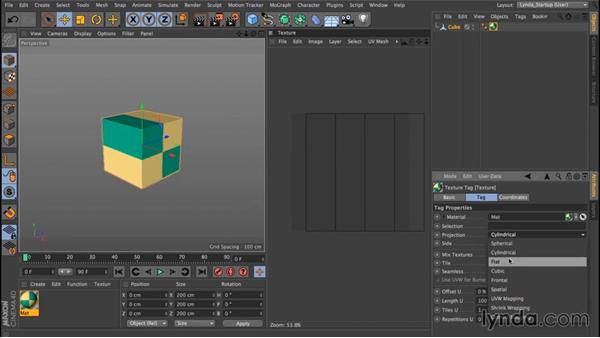 - At this point it's logical for you to ask, "How do we create UV maps to begin with?" Well, first of all, for primitive objects, you don't have to create anything. And the reason is that the UV maps are created internally and automatically. As you know, we cannot select the points of the primitive object and move them around, because it's procedurally generated. Whereas, if it's editable, you can go and move the points. The same principle, let me undo a couple of times, the same principle applies to UV maps.

Primitive objects and generated objects, for example an extruded circle, their UV maps are generated on the fly based on the data from the attributes that create each and every one of the primitives or the generated objects. The type of UV maps I'm talking about are the editable UV maps. Those apply to polygon objects. Now, the first way to create them is when you have a primitive or a generated object, all you have to do it make it editable.

I'll make the extrude editable and the cube editable. Let me unfold this. Now, when I made them editable, suddenly we get the application of a UVW tag, now forget the W it's a UV tag, it's the same thing. The W there is only for terminology reasons. So, now we have polygon objects, editable objects, we can move their points. And we have editable UVs.

How do we edit these UVs? We're gonna see in the next lesson. I just want to show you how they look at this point. Now we can either switch to the UV Edit Layout, and when I select an object you will see the corresponding UV map for that object. This data here is saved in these tags here. We're gonna use these tags later on to do certain things. But for now, let me return to my Start Up Layout and show you another way where we can actually see the UV map inside our actual Start Up Layout.

Go to Window, Bodypaint 3D, and select the New Texture View. If I dock it, and move things around slightly, you will have the ability to see your UV maps right here. And now, these UV maps are editable. There is another way to create UV maps. Let me show you. I'll create a New Scene, I'll create a cube, make it editable, I'll press "C" on my keyboard, and let me go here and select the UV tag and delete it.

So now there is no UV tag associated to this particular polygon object. So what I will do is create an empty Texture tag or, even better, I'm going to go to my Material Manager, double click on my material, select the color channel, and let's add a Surface, Checkerboard. I'll click on the Checkerboard and change the colors to something a bit more appealing.

Ah, this looks fantastic. I will close my Material Editor, and just drag my material on the object, either here or here. I'll do it here. OK, suddenly I applied the material to the object and I can see a UV map. This may not make sense at this point. The reason is that this tag is in Spherical projection. Let me make it Flat. As you can see, whenever I change the Projection, the UV Map changes because all these Projection Methods generate a UV Map based on that projection.

To make it easier to understand, I'll select Flat, select the Texture Mode and the axes, and if I start rotating my projection, you will see that the UV map corresponds to what the projection sees. So remember, my yellow grid is the dark square, and look at the rest of the polygons, how they adapt their projection to match the angle of the particular Texture Tag.

When we have any Projection Mode, except for UVW Mapping, then the UV map is created by the projection. And because we don't have the tag here, the UVW tag, then this UV map is not editable. How do we make it editable? Well the equivalent of making a primitive object editable is the following for UV maps: select the tag, go to the Tags Menu, and Generate UVW Coordinates.

This will bake this information into a UV tag, change the projection from whatever it was, Flat in this case, to UVW mapping, we will see a difference in the way the tile is previewed in our viewport, more on that later, and now, this is an editable UV map. So to recap, the two ways of creating UV maps is A) Creating any primitive or generated object and making it editable, and the UV map is generated automatically; or, if I delete this, you apply any Texture Tag with any Projection other than UVW mapping, let me try Frontal at this point, and you will see that there's a correlation between the Camera View, which now represents the dark square, and where the polygons are from our point of view.

That's what the Frontal does, it creates an automatic UV map from the point of view of the Active Camera. If I wanted to make this generated UV map an editable UV map, all I have to do is select the Tag, go to Tags, and say Generate UVW Coordinates. A couple of more things, just to make sure you understand. If I select a cube, a primitive cube, assign my empty material, set it to something like Flat projection, let me rotate it just so you can see what's going on here, if I select this and try to make it a UVW tag, I can't.

So, it's very simple to create them and now we're going to see how to manipulate them. 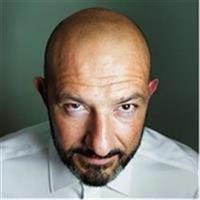 4/2/2015
BodyPaint is a subset of tools and layouts inside CINEMA 4D that allow artists to paint and texture their 3D models. These tutorials aim to teach CINEMA 4D users how to use BodyPaint to enhance your 3D pipeline.

Author Thanassis Pozantzis covers a wide set of techniques, from material projections and generating UV maps to UV unwrapping, both for hard surface models (such as packaging and mechanical objects) to organic models (including humans, monsters, and animals). Start here to learn how to incorporate BodyPaint into your production workflow.
Topics include: