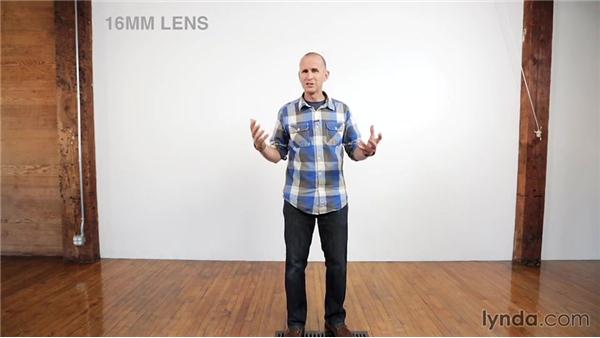 So when we ask the question, what is the perfect portrait lens? Well, that question necessitates another. The next question that we need to ask is, what kind of portrait do you want to create? Do you want to create something which is about beauty, which is flattering? Or maybe something which is more honest and sincere? And we can create different types of portraits with different types of lenses. And in this movie, I want to talk about working with wide-angle lenses and telephoto, and I want to discuss some of the things that can happen when we're working with this type of gear.

Now, when we go to a wide-angle view of this scene, all of a sudden, we see more, yet we also introduce some issues in regards to distortion and scale. I've asked my friend, Lawrence, to come in the studio. Lawrence, how's it going? And, as you can see, Lawrence and I are basically the same height. If he steps back just a few feet, all of a sudden, I look taller and he looks shorter. That's because I'm closer to this wide-angle lens. Thanks, Lawrence. He also brought in a few hula hoops which is kind of funny, but I brought these in because we all know that hula hoops are a circle.

Now, if I change the location of one of these circles and position one so that it's closer to the camera, all of the sudden, it's almost twice its size and it's a really irregular shape. And you can see the difference between the position of this hula hoop. All right. This also happens with the human body on a smaller scale, but first, let me illustrate this, say, with my hands. If I hold out one of my hands and make that appear closer or put it closer to the lens, it appears a lot bigger than the other one, which is further back.

Again, it's about the proximity to the lens which changes the scale. Now, this also happens with the human face. The nose, which sticks out furthest, can look bigger when we're using a wide-angle lens. That can create a really unflattering look. So, when shooting with wide-angle lenses, we really have to have a good understanding of this whole idea of distortion. All right, well what about telephoto? When we use telephoto lenses, we introduce something which is called compression.

Let's take a look at how that works. All right, well, here we'll switch our attention to talking about working with a telephoto lens. Now we're going to start off with a wide-angle lens, as you can see here. You'll notice that I'm closer to the camera. I've stepped away from the wall, so I appear bigger, and we've hung up some guitars. The guitars in the background appear small. We know about that because that's the type of distortion and scale issues that we have when we're working with a wide-angle lens. Well, let's change our view with similar composition to a telephoto perspective of this scene.

Now that we're looking at this scene with a telephoto lens, everything is changed. The guitars in the background, they're not only bigger, but they also appear closer to the subject, myself. That's called compression. When we are working with a telephoto lens, things which are far away, well, they appear as if they are closer and also a little bit bigger. So, in a sense, these two topics, distortion and compression, they are two sides of the same coin. Remember, when we are working with wide-angle lenses, things which are farther away appear smaller.

And they appear as if they're even farther away than they really are. When we're working with telephoto, what that does is it compresses the scene. It brings things close together and it makes it appear like that background is even bigger than it actually is. Now, this help, this happens on a smaller scale as well. For example, with a human face. When you use a telephoto lens, often what it does is it flattens features out and it creates a much more flattering look. Well, now that we know a little bit about distortion and compression, what we can start to do is keep that in mind as we use different types of lenses in order to create portraits.

9/16/2014
The photographic gear that will most directly affect the way your portraits look? It's not the camera. It's the lens. Photographer, author, and educator Chris Orwig compares and contrasts wide-angle, "normal," and telephoto lenses, with the goal of helping you choose the right lens for both the subject of your portrait and the message you want to convey. Along the way, he shoots photos with different lenses, at different angles and different depths of field, and shares the results so you can actually see how these choices impact the final photographs. Plus, Chris shares his recommendations on finding the lens that's right for you, with a review of some common prime and zoom lenses.
Topics include: