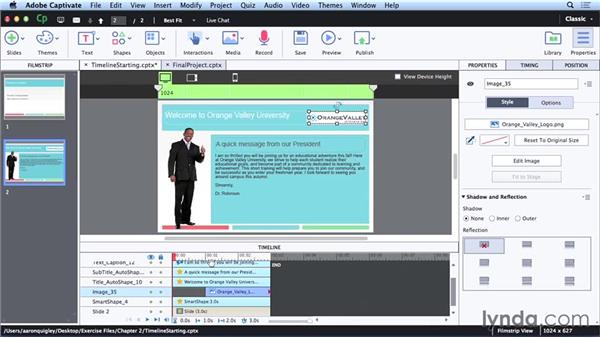 We can also see all the elements on the slide are going to be there for duration of three seconds as well. There are a few ways we can actually change this duration. If I want every element on the slide, and the slide itself to, let's say, play for five seconds, in the Properties panel with the slide selected, I can actually change the slide duration. All I have to do is simply click and type a new number. Or I can also click and hold my mouse and then drag left and right to change between different numbers of seconds. At the very bottom of the screen, there's the word timeline. If you click on the word timeline, it's going to automatically open up this slide timeline.

And I can see that each individual element that we've added to the slide has its own name and its own time signature. For example, if I wanted the slide to open up and I wanted an image to appear after, let's say, a couple of seconds. I can select that image, put my cursor on either the left or the right side of it. And then drag that bar so it has a different time signature. So for example right now, I've taken the Orange Valley logo image that we added, and I drug it to the left. Meaning this grey box, or the first second that the slides going to play, that logo won't be there. Then that logo is automatically going to appear at the first second. And will stay there all the way through the end of the slide. I can do the same thing in reverse. For example, if I wanted the logo just to flash for a second. And I didn't want it there towards the end of the slide, I could click on the far right side and drag it in. So, the way it's set up currently, it's only going to be on the screen for one second. It's not going to start on the screen, and it's not going to end on the screen.

We can test this by going up to the Preview button and selecting Play Slide. As you see, the logo was not there in the beginning, it popped up in the middle, and then it disappeared again at the end. Now, this particular side, I would like every item to be there from the minute the slide opens, so I'm going to go and drag the logo back to its proper position. In addition to changing the length of the time a slide plays, sometimes you want to slide to not play, or going to be paused the minute it opens up. For example, our slide here has a lot of text on it. And some students may be able to read that in five seconds, some may take ten or even 15 seconds to read this slide.

Because of that, I'm going to make sure the slide select on the left hand side, I'm going to come over to the actions button under the properties panel, and I'm going to say that on enter, I want this slide to pause. What that means is when the slide enters the screen or is advanced to from the previous slide. This slide's going to automatically pause. And it's going to stay paused until our learners interactive with the slide to tell it to go to the next slide. Now there's several ways that they could interact with it. When we're running the presentation, we'll notice in the bottom we have some navigation features. And they could actually hit the next button.

But a better way is to create a button on the slide that'll allow the user to click on it to advance to the next slide. In the next video, we'll take a look at creating these buttons or hyperlinks, so that when we have a paused slide, we can allow our learners to still move through the presentation. 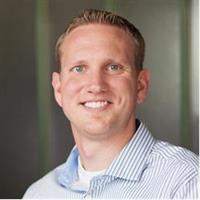 9/25/2014
Captivate 8 Essential Training guides you through the features and tools of Captivate 8, while providing instructional-design tips for creating successful elearning and mobile learning projects. Aaron Quigley shows you how to build powerful and dynamic presentations that can be delivered to almost any device. He covers adding content to a presentation; working with interactions, navigation, and assessments; and making your training adjust to display correctly on desktops, tablets, and smart phones. The basic elearning features are addressed, as well as new advanced features such as touch-gesture support. Plus, get a brief tour of the publishing options so you can find just the right format for your project.
Topics include: