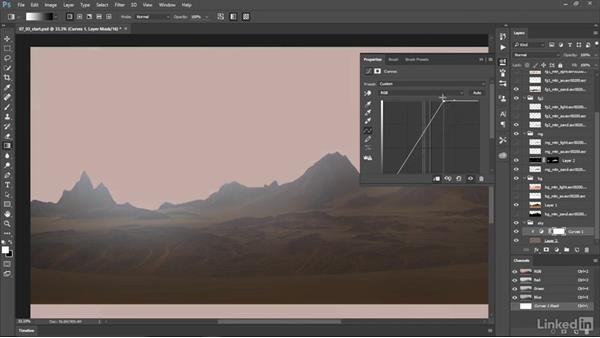 - [Narrator] Okay, so let's start painting out sky. You'll notice there is a black outline. Sometimes that can be a display issue. If you just press Z and then zoom in, you can see that it goes away. Or at least it's not as prominent. You can see the more we zoom in the more we see it. So there's definitely an issue but for now, it should be fine. Let's work at this resolution, 33 should be fine. If we scroll down to our sky folder, and inside we see that we have a base color.

Well what we want to do is turn this key eye back on. Press shift and click on the quick mask in order to enable it and then press V and move it around until you get to your sun. Now with that quick mask selected, press control+T and you'll see that only your quick mask is being manipulated, not you actual image. So once you've zoomed it out to a point, you can press enter and now study the color of the sky. In fact, I might just increase this a little more so you can see it.

First thing is to think about what's actually happening here. Now apart from the fact that we are on an alien world and the atmosphere here is going to be different than the atmosphere on earth, we can still follow the same principles of how the sky works. As the horizon recedes into the distance, also the curvature of the planet, assuming that the planet is curved of course or sphere in this case. If you were drawing a flat world, then the atmosphere might look quite different.

In this case, we're presuming that we're on a spherical world of some kind, an alien planet, and the atmosphere recedes into the distance. But it also gets thicker. And the way that you can see that is, creating a new layer, I'm just going to draw here for you, let's say that we have a round planet. We're standing on top of it. Now we say we look out into the horizon, which is essentially this way. Well around the planet we also have our atmosphere.

So let's get rid of my silly drawing and let's look out into the horizon and think of that when we're drawing the sky. Now in this case, you have a base layer. And let's say that the topmost part is the part where we see the most through the atmosphere. So there's the least amount of particles, we see the most. Let's say that we'll look through to our horizon, therefor the color would be different. Let's do a little experiment. Click on the gradient tool, press D for Default. This will give you the black and white. And now create an adjustment layer.

Curves will do fine. Press alt and in the middle of the two layers you can combine them together. Now let's drag the top of this. Keep dragging until you get to the last point. Now you can see your eye's a miraculous thing, it already tries to tell you that these values, the values that I'm seeking. In fact, if I do that again, you'll see that these values are clearly not the values that your eyes are seeking. The reason for that is because your eye has been trained to look at the real world, in a sense.

And as you can see here, the sky looks somewhat too close as to what it would perhaps in reality. Whatever this reality is. So clicking on the mask there, with the gradient tool selected, press shift, click and drag. This will make sure that your dragging is completely straight. Now does that make sense? No it doesn't. What about the other way? That makes a lot more sense, doesn't it? So this is that principle that I was talking about. The further away that you go, the thicker the atmosphere is and the thicker, therefor, the color.

Now if you think about the fact that we're seeing the sun through this or some sort of a star perhaps, that star is giving of a lot of light. So if we're to create just the representation of that star, I would start by clicking on the marquee tool and the elliptical in this case. Now press shift, this will give you a nice even circle. Press x to swap your black and white, and now with a new layer, press, oh, backspace. Now press M and click outside of your selection. This will unselect it.

There you go, you have a star. And you can see that it seems to be working quite well. Now we need to start dialing in the details. Unfortunately, I feel like we are a bit too bright into the horizon here. So let's turn back our key are so we can reference. So you can see that our star or sun is emitting a light which is coming through the atmosphere and some how creating this large big blue bloom. Well the first thing we need to do is get a gradient in the sky which looks a lot less in contrast than this one.

So let's turn off the key art and then let's combine these two layers. Let's show you another technique here, let's press the curves selection down here. Let's now work with our contrast. Now you'll notice this is the darkest part of the image and this is the lightest, so let's lift the darkest part of the image and let's bring this down further. Now you can start to see that our contrast starts to go away. Now this is the first step of color correcting.

Next is the color. So once you are done with that, you can change into your red. Perhaps bring down the top of the reds and bring them up into lows. It's always important to reference back into your key art. Let's turn that back on, we're slowly getting there. I feel like we need a little more red. You'll notice that as I'm playing with these sliders, I'm getting more and more different types of color coming through. In this case, if you remove red, you're revealing green.

So let's choose green. Select the topmost of the green and bring that down. Now when you remove green and red, you get blue, and that's what we want. However we also want blue perhaps to be a little stronger in the lows. Now let's go back to our RGB, our black and white I should say, our contrast or value. And let's bring that down even a little further. Now when your contrast is balanced and evened out, you can actually click on this curve and manipulate any part of the image more accurately.

In this case, let's lift up the bottom slightly higher and then bring down the mid lows. And we have a little too much red in the top here so I can go to the red channel again and do the same by perhaps bringing it back. Okay, now let's turn on our key art and see that we've gone a little too far away again. Let's continue to work on this. 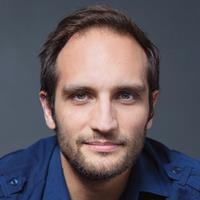 11/7/2016
Modern matte painting is a multidiscipline art. Matte painters need to know how to create 3D geometry, extend worlds with nodes and macros, create detailed materials and shaders, digitally paint convincing detail, and composite the many layers together into a final render worthy of the big screen. Danny Janevski, matte painting supervisor for DreamWorks, shows how to master these techniques using software such as Clarisse, ZBrush, World Machine, Photoshop, and NUKE. He covers a wide variety of current industry techniques used in creating feature films, including layout and set breakup, top-down renders, environment and terrain generation, painting, and final render.
Topics include: