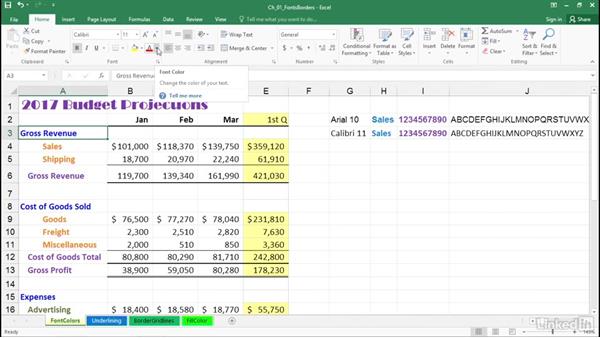 - As you work with Excel there are times when you're working with text and numbers, and you want to have a different color for the text, you want to possibly use a different font. On the Home tab in the ribbon we've got a group called Font, not all of the buttons here are related to Font, most of them are, but we've got a title in this worksheet right here and as I click this cell A1, recognize it says "Broadway," there are lots of different fonts we can see here. If you are exploring these or trying to change them, and your data happens to be over in column A the way mine is right here, you might either temporarily put in some new columns, this will allow you to see the choices a bit better, so I've just slid across cells A, B, and C, right click and insert to move those over, and we could if we wanted to explore some of the different font types that are available here, and you can see, not necessarily all of what's happening in the background, but probably enough to get some idea as to whether you want to make some changes here.

And depending upon the operating system that you're using, or possibly the version of Excel, you might see different choices out there, some people probably spend a bit more time on this than they need to. The standard font in Excel is called Calibri, since 2007, the previous font was called Arial, and you'll still see both of those used a lot, there is a difference, and on this worksheet, as I scroll to the right, notice right here, as we highlight the data here, recognize this idea too, when you're highlighting cells, you will see, on the Home tab, for example Calibri 11 or Arial 10, whatever it might be, but that really only refers to the first cell, it doesn't necessarily mean the others are the same or not the same, and as you happen to look over this list, maybe this looks a little bit small.

Is that size 11? Yes it is. But this is size 10, so be alert to that, sometimes you care about these sizes, sometimes not. Here's just a comparison by the way of Arial and Calibri and how they look, so the old standard, Arial 10, prior to Excel 2007, I think most people are probably using the newer version now, Calibri size 11. But of course, you always have the option to change the font, that's those various fonts that we saw, as well as the size of the font. I don't need those empty columns anymore, I'll simply drag across these, right click and delete them.

Also in this particular worksheet, notice we're seeing blue text, orange text, we can change the font color at any time, more widely used in titles than with numbers, but for example, right here we could, if we don't care for that color, possibly go to the Font group on the Home tab, there's that button right there called Font, if we click it now we'll get red font, we've got a drop arrow and lots of choices here. And Excel's so-called Live Preview effect is working right now, so as I'm sliding over these, we see the color changing on the font.

And most of the time the background on the Excel worksheet is white, or at least a light color, so you're likely to use darker colors for the fonts so that the text shows up clearly. If for whatever reason you're not finding the colors you want here, you certainly can go to the option called More Colors, and explore some of the 127 colors that are here, some of which are already available anyway. In addition to changing the color of the font, sometimes you, of course, want to add bold or italic. I think these bits of information here are readable in bold, but you know, if they're not they look like that, so from time to time that's certainly available, italics, these are buttons all easy to work with.

This button here relates to borders, we talk about that in a later movie. So it's easy to change fonts, there could be situations too where you're thinking of changing the color of fonts for numbers, I would strongly suggest do not do that, particularly because, in accounting circles, negatives are usually put in in parentheses, and sometimes they're in red, and sometimes both. Red numbers raise a red flag as we say, and they're generally considered to be negatives. So if you were to highlight the numbers, possibly in some situations, maybe a dark blue is going to work OK, again sometimes you're just trying to differentiate the information, but stay away from red, it could come up with the wrong connotation.

And most of the colors here are a bit too light anyway. I think many people are more inclined maybe to work with the color background rather than changing the font, but you do have some options here. And depending upon the number format that you're using here, some of these will automatically become red if you use negatives, we're not seeing the examples here on this screen right now, but that's certainly possible too. So at different times and for different reasons you highlight text and or numbers, and you change possibly the color of the font, the font being used, the size of the font, there could be other times too when you've got a series of cells and you simply want the text to be a bit larger, you could easily make a number change here, but you could also increase the font this way, make your text a bit bigger, you can certainly click that, that causes column width and row height changes as well, not always the best approach, but not necessarily bad, and of course we can decrease the font size as well, too.

So you've got a variety of buttons here that allow us to control the appearance of fonts in worksheets in Excel. 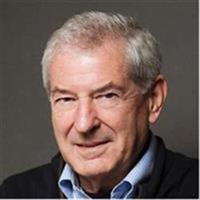 2/18/2016
Get simple, powerful tips for making spreadsheet information readable and understandable in Microsoft Excel 2016. Dennis Taylor shows how to emphasize specific cells with fonts, borders, and color; adjust the positioning of cell contents; format numeric data; and add style and readability to worksheets. You'll also learn how to add pictures to worksheets and discover automation techniques (including conditional formatting) that take the drudgery out of formatting even the largest amounts of data.
Topics include: