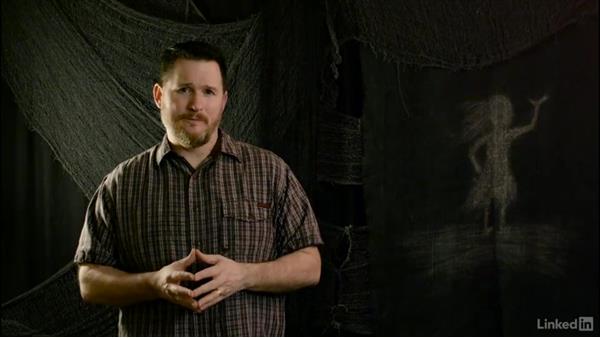 A lot goes into conducting an acting audition. The actors auditioning need to be scheduled to perform and give their auditions. How far apart should auditions be scheduled? How many team members should you have with you to assist in the casting process? These subjects will be looked at in this video tutorial.

- Let's talk about holding a successful audition. I don't recommend just publically posting the audition times because you'll never know who will just show up. What we did is to have everyone email us their headshot and resume so that we could weed out actors that didn't fit the role at all. This really reduces your casting choices, so don't be too harsh early on. I was almost certain that I wasn't going to cast William Brad based on his headshot. I'm really glad that I scheduled him to audition, but doing this preliminary cut also saves you from taking up audition time with people that you know aren't right for the part.

As I mentioned earlier in this chapter, we had all those women submit their headshots to be considered for the role of Garun. Because of the role of gender in this movie, that wouldn't have worked. Where should you hold your auditions? I advise against holding them in someone's apartment or house. That creates the appearance of unprofessionalism, and actors often avoid situations like this because they can be dangerous. We held ours at a local theater near the Space Needle. It has space meant for actors, and everyone in Seattle knows how to get to the Space Needle, so it was familiar and felt like a legitimate place to hold an acting audition.

Generally speaking, places that actors rehearse for theatrical performances work great for auditions, like community theaters, college theaters, acting schools, maybe even a local high school could be an option if needed. I think it's also important to not do this alone. Our second assistant director Bry Troyer came to the auditions to help the actors sign in and also stood guard at the door so that an audition wouldn't get interrupted if someone was early or late. I also brought Ash Calder with me. Ash is one of the best directors of actors I've ever seen, and he was always next to me.

After each audition we would kinda digest the performance of the actor together. He always has brilliant insights and helped me to see things that I might have otherwise missed. Elijah Tiegs was also there doing the behind-the-scenes filming for this training. But even when there isn't training involved, I still recommend filming your auditions. A lot of times reviewing the video of the auditions can help you see things that you missed in person. and make the final casting decisions a little easier. In my case, Bry and Elijah are also great writers and film-makers, so I talked with all of them about the actors that auditioned.

Bouncing ideas off of Elijah, Bry, and Ash really helped me feel like I was making the right casting decisions. So what do actors do when they audition? This is really up to you, but you should decide and let the actors know beforehand if possible. If your script is in the early stages, you can just have the actors perform a monologue of their choosing. Actors usually have a handful of snippets from plays or movies already memorized for just such an occasion. But I find that it's much better to give the actors sides, which is film-maker lingo for pages from your script.

When actors have sides, they can make choices about who the character is that they're auditioning for. And when they read the words of your actual script, you'll probably have an easier time figuring out if they're right for the part or not. If you use a dialogue scene from your film, it's important that you also bring someone that can read for other characters in the scene. Ideally you'd have any lead actors that you've already cast be there so you can judge their chemistry with the people auditioning, but that isn't necessary, and we didn't do that. For our audition I had actors auditioning for Garun read this section from the film.

- Impossible. Where did you come from? - I am her keeper. - So I had Ash read Ta'ani's lines even though he looks and sounds nothing like Eva Jane. But having that extra reader give the auditioning actor someone to interact with, which helps their performance. That also allows you to judge how well the actors listen to their scene partner, which is very important, as we'll see later in this series. We also had snacks outside the room for those auditioning so that they felt welcomed and that their time was valuable to us. Once they came into the audition we had them slate.

On set, that term means to use the clapper board to mark a shot, but in auditions the term slate refers to the actors talking directly to a camera that is recording them, and saying their name and the part they're auditioning for. - I'm Will Rose, auditioning for the preacher. - Hello, my name is William Brad, and I'm auditioning for the role of Garun. - My name is John Gleis. - My name is Josh Biber. - Andrew Dubois. - As far as scheduling the auditions, I scheduled mine in 15 minute increments. That's probably longer than you need, though, and if you're short on time you could definitely pack the auditions into 10 minute increments or less.

But I don't mind having a slightly longer audition. I find that actors usually have some huge catastrophe on the day of auditions and are usually late or maybe even really early. Also, I like to talk to the actors and get to know them a little bit. I also like to give them direction during the audition. I want to see how well they respond to taking notes and changing things up on the fly. In the next tutorial, we'll look at some of those notes that I gave to those auditioning, and how that factored into the audition process.