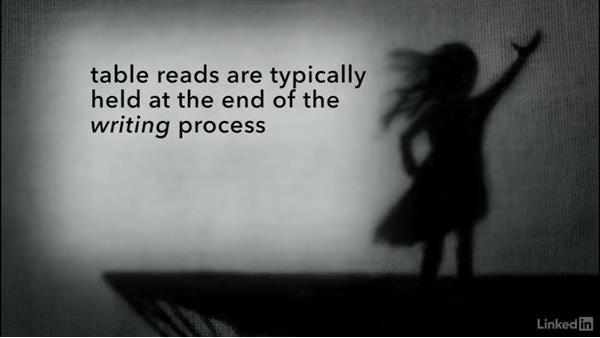 Often in pre-production, film productions will hold a table read, which is an event in which actors will gather around a table and read the entire screenplay aloud together. This is a great opportunity for writers to hear their dialog read out loud by actors, a great chance to see acting chemistry between actors, and for productions to get a better feel for their film before production.

- Kind of related to the rehearsal is the table read.…A table read is where actors come together,…usually at a long table, hence the name,…and read straight through the script, from start to finish.…This footage is from a table read of a script…by Assurance Behind the Scenes producer Elijah Teagues,…with parts being read by Assurance alumni.…Typically, on short films, table reads are done…at the end of the writing phase of the process…so that writers can hear actors verbalize their dialogue.…But sometimes productions will hold an informal table read…with actors that they might be thinking of…for a particular role,…and it could kind of become like an audition of sorts,…or if the actors are already cast,…it could be an opportunity for the actors…to play with different choices in a more casual atmosphere.…

This might also be a great time to allow actors…to improvise a little, see if the actors don't come up…with some great lines that should be…added to the script before production.…So, while not technically a rehearsal per se,…