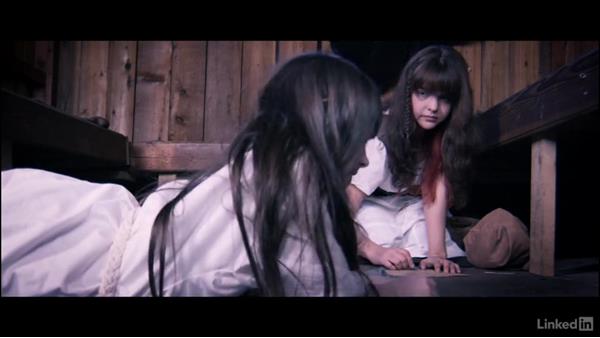 While holding acting rehearsals in pre-production, it can be helpful to actors to recreate the scene as much as possible. This might include lightly dressing the set, or bringing makeshift props to the rehearsal for the actors to use. This allows the actors to more fully prepare to be on set, and helps the acting performance to feel more like it will on the day of shooting.

- As we've talked about repeatedly in this series,…acting is all about generating real emotion.…So, it's a good idea, even during rehearsals,…to recreate the scene as much as it's possible.…Now, obviously, you don't want to go too overboard with this…because one of the benefits of rehearsals…is to go through the material…without all the stresses of production.…But the more you can help the actors feel…like they'll actually feel on set,…the more you'll help them generate real emotion…during rehearsals.…I love working Eva Jane with all of her experience.…At one point, she insisted that her and Natty…recreate the hut scene as much as they could…in the rehearsal.…

So, they got off their nice squishy chairs…and got on the cold hard floor.…Eva even suggested that they use actual pencil and paper…for the rehearsal…because that's kind of like what they'll be doing on set.…And all of this so that they didn't have to mime or pretend.…They wanted to feel what the hut would feel like…as much as they could.…So, maybe if your characters are drinking something,…