Should you have rehearsals? 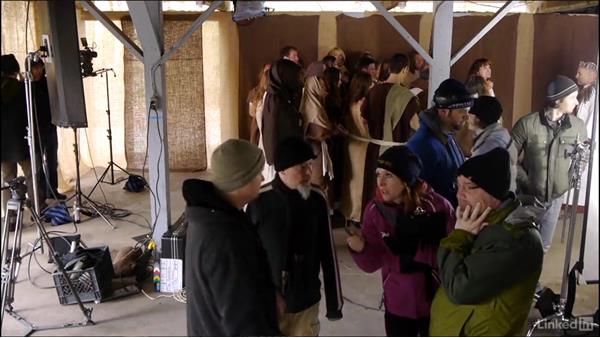 Some directors disagree with the idea of having acting rehearsals, while some directors feel that rehearsing with the actors before production begins on the film is essential. When actors are rehearsed, there are less surprises on set, but there also tends to be less spontaneity and improvisation during film production.

- Before production, many directors hold rehearsals with their actors. This is a time to run through the scenes, answer questions, iron out character nuances and so forth, before the stress of production is there. There's no makeup, no wardrobe, no camera and lights in your face, no first AD yelling about the time. Just actors and director working out the scene. It's also an opportunity to get the cast familiar with one another. This is especially important in our case because my young daughter Natty had limited acting experience and was a little intimidated by all the new and much older faces.

Thankfully, I cast Eva Jane as Ta'ani and she instantly took to Natty and helped her feel comfortable. Acting, it just makes you feel really exposed. So, when actors are comfortable with each other, it tends to make the actors performances a little more sincere. Now, I love rehearsals. I honestly can't imagine just showing up on set with all that time and money burning and then trying to figure out all of these acting details then. Or trying to instantly get actors comfortable with each other. That would totally stress me out. But a lot of directors insist on not having rehearsals.

The thinking there is that the first time actors perform a scene, there's a lot of spontaneity and energy that isn't there after rehearsals. And, you know, that's a valid point. When I'm acting, my first few takes are always the best. After that, I start thinking about it too much, I get in my head, I'm not as playful or as creative as I was. So, holding rehearsals is really a matter of your personal preference. There's no right or wrong here. However, if you're a director, I strongly recommend finding time to connect to your actors personally if you don't hold rehearsals. You could arrive to set early to talk to them while they're getting makeup applied or you could go out to lunch together, whatever it takes.

But the actors and director should have some degree of familiarity and respect before arriving to set.

Video: Should you have rehearsals?