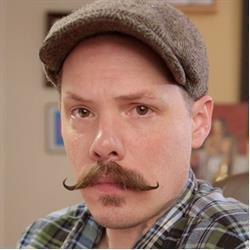 Jason Seiler is a Chicago-based artist. His illustrations appear in Rolling Stone and the New Yorker.

Jason Seiler is a Chicago-based artist who began his professional career in a rather unorthodox way. After getting in trouble for drawing parodies of his history teacher in high school, Jason's quick-thinking principal hired him to draw portraits of different faculty members. A professional artist was born. Jason went on to study fine art illustration at the American Academy of Art in Chicago for two years before beginning his professional work in earnest. Jason's illustrations and paintings have been featured as covers and interior pieces for publications such as Rolling Stone, Billboard, Utne Reader, Time, the New Yorker, Der Spiegel, Businessweek, the New York Times, the Wall Street Journal, the New York Observer, the Weekly Standard, MAD, Golf Digest, Adweek, KING, Revolver, Guitar Player, and the Village Voice as well as for companies such as Adobe, Penguin Group, Disney, New Line Cinema, Universal Pictures, Aardman Animations, and Sony Image. Jason worked as a character designer on Tim Burton's Alice In Wonderland, helping to create such characters as the Red Queen, the Tweedles, and the Bandersnatch. He has also painted six stamps for the USPS Forever series and four paintings for the film Escape from Planet Earth.

Jason's work has been exhibited several times at the Society of Illustrators in New York as well as at the Society of Illustrators West, where he was awarded the silver medal for his portrait of Elvis Costello. In 2014, he was awarded the Patrick Nagel Award for Excellence for his painting Mother Can you Spare a Room, for the Wall Street Journal. His work has also been exhibited in