Combining HDR and noise for a motorcycle man 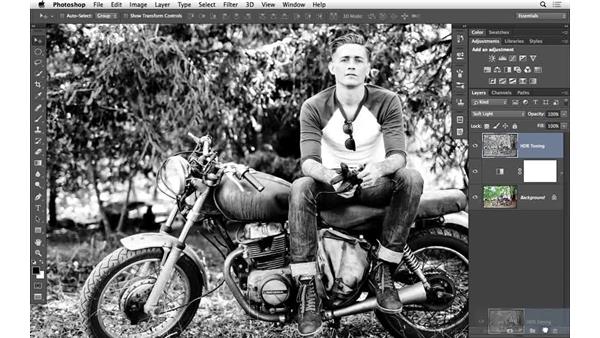 - In this next Mini Project we'll be working on this photograph with Tanner on his vintage motorcycle. And here we'll begin by converting the photograph to Black & White, then we'll use Soft Light blending to blend in the HDR Toning layer, and then we're going to extend this a little bit further. We'll explore how we can actually copy our HDR Toning layer and add some Noise to it in order to create a bit of a film grain look, which will be kind of fitting with a photograph like this, especially because we have this vintage motorcycle with this character in the redwoods here in California.

Alright, we'll let's begin by clicking on our Background layer. Step one is to navigate to our Adjustment Layer icon and choose the Black & White adjustment. Next I'm going to decrease the Reds because I think the face was too bright, so I'm going to go ahead and decrease those. And bring the Yellows down too. Now the Greens which we have here, the trees, we can really modify those. We could make it a little bit more infrared, or we could darken those up. I'm going to darken those trees up. I should also point out whenever you're using these sliders you have to be careful. You can't necessarily go to the extreme, like to here, it just looks really strange back there.

There isn't any detail in that area or in those leaves at all, so I want to bring this down to darken it, and just watch the limits. In other words, just make sure that the photograph still looks good and is holding up. Alright, well so far so good, we have the image converted to Black & White, here's before and then here's after. After having done that, next let's go to our HDR Toning layer. This HDR Toning layer was created, just like in the previous chapter, by duplicating the image and then applying that adjustment. And then copying the layer back over.

I've already brought it over in order to speed up the workflow here, yet if you aren't familiar with how to create that layer go back to the previous chapter. Alright, well now that we have this what I'm going to do is take my blending mode for the layer to Soft Light. This gives us this really nice, sort of subtle snap with this image. You can see here's our before and then now here's the after. If I zoom in further you can see that even a little bit better. Again, you can see that before and after. It isn't over the top, it isn't incredibly dramatic, people wouldn't even really realize that you used HDR Toning.

But for me it has a nice feel or grip to it, which I like. Well I'm going to take this feeling further by duplicating the layer and adding some noise to it. So here let's go to the HDR Toning layer, drag this to our New Layer icon, let's call this new layer Noise. Next we'll navigate to our Filter pull-down menu, then select Noise, and Add Noise. So again, you copy the HDR Toning layer, go to Filter, Noise, Add Noise.

Now the copied layer, the Noise layer, already has Soft Light blending in it and because of that we're already going to see through to the Noise to our underlying layers. And often when you're working with Noise you can go too far, can sort of muddle up the whole image. You'll notice that here it's showing me the Preview without Soft Light blending, but then back here that's where I'm seeing that Soft Light blending. So we want to pay attention to the image. Uniform, in my opinion, doesn't tend to look good as Gaussian, that's just my own personal preference. Also I almost always have Monochromatic on, because who wants a lot of colored Noise on the image, right? That just looks weird.

Alright, so we leave Monochromatic on, then we drop our Amount down. What we're looking to do is just to add some contrast, but then a little bit of that nostalgic, vintage feel, so the photograph feels a bit more distressed, or raw, or real. And so I'll leave my Amount at 11, I think that looks good, at least on my screen. And then click OK. Now with this layer you can see here's our before and after, you can see how we're adding contrast and also some Noise, which sort of smooths things out a little bit, makes the image feel a little bit more like it was captured with film.

And what you can do is you can blend these two layers together, in other words you can drop the Opacity of one of the layers and say, "Well maybe I want a little bit less of this one, "and perhaps a little bit less of this one as well." Until you get the right mix of the two layers to create the desired look. Let me show the before and after with these settings here. Here's before and now we have after. And again it just creates a different mood or feeling. Now is this mood or feeling right or wrong? That's kind of the wrong question, really it depends upon what you want to accomplish.

And my goal with these Mini Projects is to give you some different ideas and how you can start to use this technique in order to accomplish different looks and also to be thinking about how you can use this technique with different types of photographs. Like with this image I didn't really want an over the top, really intense HDR Toning, rather this is a image which is quieter, it's a bit more subtle. So here we have it, that before and then the after. 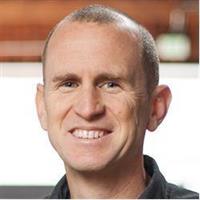 1/7/2015
Welcome to another hands-on Black-and-White Project. In this course, photographer and teacher Chris Orwig shows how to use HDR toning to craft a distinct look, starting with a raw black-and-white photograph. First, he shows how to perform basic adjustments in Camera Raw, and then moves into the HDR Toning controls in Photoshop. There he'll use sharpening, masking, and Curves to refine the portrait and blend the HDR layer back into the original image. And to prove HDR is not just a great look for portraits, Chris introduces several mini projects that show how to integrate the HDR toning effect into different photographs, such as landscapes and vintage-inspired pics.

Video: Combining HDR and noise for a motorcycle man