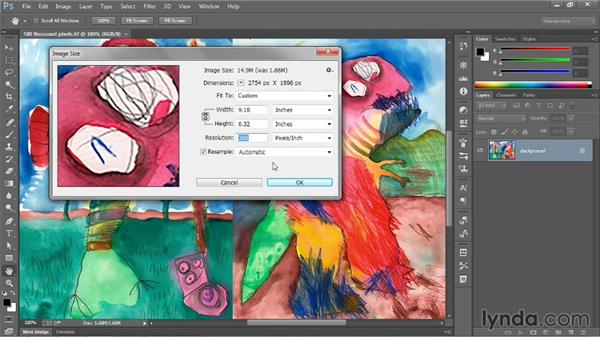 In this movie, I'll introduce you to the Image Size command, which allows you to change the image size and resolution of an entire image. To get to the command, you go up to the Image menu, and choose Image Size or you press the keyboard shortcut control Alt+I or Cmd+Option+I on a Mac. And that brings up this dialog box that now contains a preview, so you can anticipate the effects of your changes on the image. And you can either drag that preview to a different location, or you can center it at a specific point by moving your cursor out into the image window and clicking.

And in this case, I've centered the tyrannosaur's head Inside that preview. Notice up here at the top, the word Dimensions, which shows the image size in pixels. So it's 918 pixels wide by 632 pixels tall. You can click this down pointing arrow head and switch to some other unit of measure. However, I don't recommend you do that, because pixels are always going to give you the best sense of what's happening inside your file. We also have the size of the image in RAM, that is in memory.

So anytime you open an image in Photoshop, the program loads the image completely uncompressed in RAM and an uncompressed RGB image takes up 3 bytes for every pixel. One byte for the red information, a second byte for the green, and a third for the blue. And, as a result, if you ever wanted to compute how big an image is in RAM, all you have to do is measure its width, 918 by its height 632 by 3. Next, notice these width and height values.

They represent how big the image is when you go to print it or when you place the image into a vector-based program, such as Illustrator or InDesign. They are not indicative of the size of the image on screen. Now, by default, these two values are linked to each other, so that you're going to scale the image proportionally. If you'd rather stretch the image non-proportionally, then just click on this little chain icon in order to break the link. But I want to go ahead and keep it on, because for this image, I would rather resize it proportionally.

Notice this Resample checkbox down here. This means that any modifications you make to these values will change the number of pixels inside the image. The word Resample merely means that Photoshop has to rewrite the pixels by averaging the existing ones. So let's say I want to increase the resolution value. Because Resample is turned on the resolution value is not linked to the width and height values. So I can change that value independently to 300 pixels per inch for example and that's going to increase the size of my dinosaur.

Now, whenever you're upsampling, it helps to be able to see a larger preview. And you can, by expanding the size of the dialog box. You can drag one of the edges like so or I'm going to go ahead and fill up the entire screen here by dragging the Image Size dialog box up to the top left corner and then you can drag down on the bottom right corner in order to make this dialogue box as big as you want it to be. Now, I'm going to go ahead and click and hold inside the image. And notice when I do, Photoshop shows me some jagged transitions. So in order word, it's just blowing up the pixels.

When I release, it shows me what the image is really going to look like. When it smooths out those transitions, that smoothing process, which is ultimately a function of averaging the pre-existing pixels, is known as interpolation. Now, I don't expect you to remember all these terms right now. So I am going to explore them in more detail in future movies. Now, because we increased the resolution, we're adding pixels to the image and that's known as upsampling. If we were reducing the number of pixels, that would be called downsampling. Notice also that my dimensions up here have changed. So the actual image size has grown now to 2754 pixels wide by 1896 pixels tall. And, the image has also grown in RAM, now to nearly 15 megabytes, so this is a whopping change.

We're increasing not only the width of the file by 300%, but the height of the file as well, and as a result, we're inventing 9 pixels for every 1 that we used to have. But let's say you don't want to modify the number of pixels inside the image, you just want to change the resolution value and let the image shrink in print. So right now it measures 9 inches wide by 6 inches tall on the printed page. If I turn off the Resample checkbox, notice all the values are now linked together.

And because I increase the resolution value, I'm squishing more pixels into a linear inch. That decreases the physical size of the image when I print it. We'll now print at about 3 inches wide and 2 inches tall. If I wanted it to print larger, then I would just go ahead and dial in a lower resolution value, such as say 72 pixels per inch. And now, the image will print at nearly 13 inches wide and nearly 9 inches tall. And of course, you can modify these values as much as you want. If you know for example that you want to print the image 12 inches tall, then the other values will change to accordingly.

And in my case, the resolution drops precipitously. And then finally, you have this Fit To pop-up menu that contains a bunch of predetermine sizes here, all of which are going to in one way or other resample the image, that is change the number of pixels that are at work inside this file. And that, folks, is your introduction to the Image Size command. In the next movie, we'll take a look at a practical application. 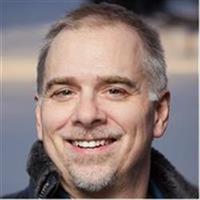