Polishing and then adding texturing using Noise and Slash 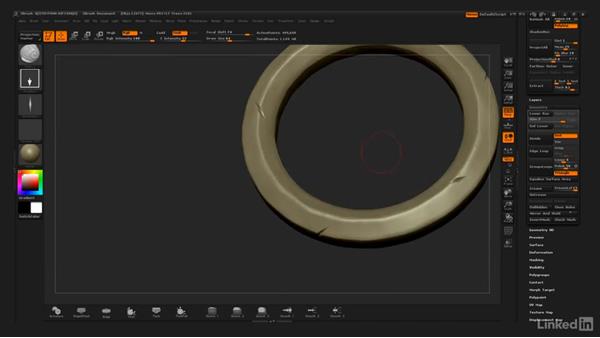 In this ZBrush stylized sculpting training lesson, your instructor, Michael Ingrassia, will teach you how to detail and polish the compass ring for your pirate journal. After polishing out the metal, you will weather the asset by adding detailed cuts using the Slash tool and also adding Noise to create a pitted metal effect.

- [Voiceover] OK, so the first thing I'll do is divide up a level six, in fact I'm gonna go to a level seven, because we're good at this point. And I think I'll hit it once again with my polish. This time I'm doing it without radial symmetry to lend a bit more of a unique flavor to the edges. So I'm going to quickly come through here and polish out the edges.

And finally, we just have the outer edge, we'll just hit that quickly. So now I can begin adding some damage. Not gonna worry about the interior since the skull is actually going to be fitting inside there. I want to come over back to my slash tool and let's pull a slash cut, again that has to be drag-rectangle, and the intensity is always low on that one.

Oh yeah. The definition on that, the detail is beautiful on that. So that's gonna work out really well. So I'm going to just add a couple of nicks throughout the piece. Put a few in the corners here. And this is just random. You just have fun with it and eyeball. The only thing you do have to be aware of, and you want to be careful of, is sometimes the angle that that you pull it at is going to be clean or it's going to be a saw-toothed.

So you want to just be aware of that and try to pull a clean line whenever you can. So in this case I'm just going to rotate around. You could see that's much cleaner. So I'll go with the angle that way. Great. Now one of the the things I want to do on the metal, and this is actually a technique I don't do that often, in fact very rarely, but it's actually a pretty cool technique so I want to show it to you. We're going to use Noise and the Noise will allow us to add some pitting to the metal.

And because there's so many different variations that you can adjust you can do some amazing stuff that's very unique-looking. So we'll just go over to Surface and I'll turn on Noise and you can see how it automatically roughens up the metal for us. So we have a whole variety of different things we could change here. Of course we have the Scale, which is going to change the roughness, make it look very much like rock, all the way down to minuscule, where it's almost like sand or just a very mild skin texture.

So I'm going to play around with a couple of the settings. One of the things I wanna be very careful of is to not have too much. So, although I happen to like the pitting I have here, it's too much, it's all over. I want to back that, I want to tone that down a little bit, OK. So you can see how we get a really cool pattern. Again, I'm trying to minimize this and have as least of Noise as possible.

I just want a few flakes scattered throughout. So, let's just play with these settings. Okay, that's going to inflate. Great. Okay. 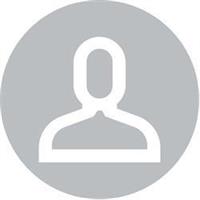 6/24/2016
If you are new to ZBrush and looking for practice, look no further. Explore these interesting and easy sculpting techniques for ZBrush designed specifically for beginning and intermediate users. Artist Michael Ingrassia covers many of the basics that can often be confusing when first learning ZBrush's unique interface. He also shows how to "think traditional" and translate analog sculpting techniques to ZBrush tools. Along the way, he demos his favorite brushes and introduces techniques for masking, creating alpha maps, moving and duplicating geometry, and stamping shapes and textures. Each technique is showcased in a fun and multifaceted project that takes full advantage of ZBrush's powerful features, and the materials, brushes, and concept art are all included with the exercise files.
Topics include:

Video: Polishing and then adding texturing using Noise and Slash