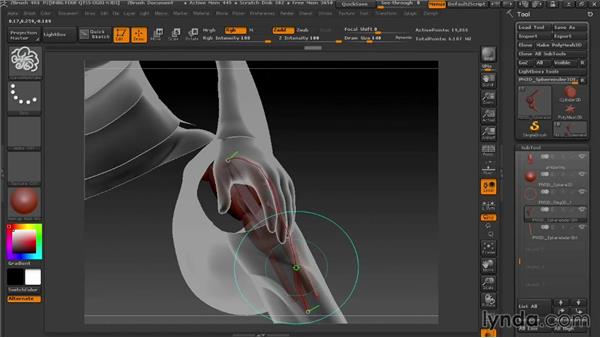 One thing you almost cant do without when making an android is to have wires running through it. Making things like tubes in ZBrush used to be very difficult, but now with Curve brushes, it's much easier. In this video, we'll look at some ways to use these special brushes to make some wires. So let's hit B and then C on the keyboard to show our curve brushes So there's several different brushes that let you use curves to create new objects as insert meshes. For now let's go and click on Curve Multitude. So with this brush, you want to draw on the active sub-tool.

So for now we've got the knee assembly as the active sub-tool. One thing I want to do is turn on the Opacity mode, so we can kind of see through the legs. Okay. Now let's just draw a curve. Now the thickness of the tube is determined by the size of the brush cursor. So let's increase this a little bit. Something pretty big. And then if we click on the tube again, what we get is an update in the size of the thickness of the tube. So let's bring that back down. I'm going to hit S, make that somewhere like five or six, and just click on that again.

Now when you're working with curves, there's two different cursor types. There's the red one that we looked at which changes the size of the thickness of the tube. But there's also the blue cursor. And that shows up whenever we're close to the curve. So when we're far away it's red. When we're close, it's blue. The size of the blue cursor determines the area of influence when you click on a curve. So this will edit the shape of the curve. So right now we've got a pretty big blue cursor. If we make this smaller by hitting s and decreasing our draw size, now we're going to make very small edits to the shape of this curve.

Now sometimes it can get kind of scrunched up in here, so what's helpful is to just grab on an end point, and it'll kind of straighten that out. So let's make our blue cursor a lot bigger now, and I just want to position this to inside the leg. So notice it's kind of poking through right here? Let's just get it all nicely tucked up inside so it's not overlapping anything. Okay, looks pretty good. So let's make a couple more curves. Now, if you're too close to an existing curve, you'll see this red line connecting to it. And that means that it'll make a new curve connected to the existing curve, and I don't want to do that.

So let's make sure we move far enough away so that it starts a new curve. And just draw something going through here. And now we can edit the shape of this. So we want to make sure it's not poking through that's a joint there. Better get this out a little bit wider. And I want to make sure it's not poking through down here, either. So I just want to look at it from all different angles and just make sure. It looks good. Okay, and let's draw one more on this side. Okay, let's just adjust it's position so it's not sticking through anywhere I don't want it. Sometime it takes a little bit, back and forth, to get it just right, and maybe I'll grab on an endpoint to help stretch this out so it's not all kinked up. Okay.

Looking good. So, just like the other Insert Multi-mesh Brushes. The curves actually create this new geometry as part of the existing subtool. So what I want to do before I continue is break this off into a new subtool to sort of lock this tube in so we can't edit it anymore. So let's go to our subtool palette. And go to Split Unmasked Points. So you can over here in our subtool palette, we've got these tubes as a new subtool. Now, back in our knee, we've still got the curves.

Now I don't want to use these curves anymore, so we can actually delete them if we hold down the alt key, and then draw a new curve that goes through them. It should actually delete them. I have to do it a couple times. Okay, looks like it worked. So, one last thing for now, is a different type of curve brush. Let's hit B to bring up our brushes. And what I want to do is grab the Insert Cylinder EXT. Now this actually uses little pieces of geometry, little models. And positions them along a curve and there's actually several different curves to choose from. So let's see what happens when we draw with this curve.

Alright, let's zoom in to see what this looks like. So it's actually making a curve out of these little segmented pieces. Let's make it a little bit thicker so I want to increase the size of my red cursor and click on it once more. Okay, so it's like a interesting hose type texture, so let's just position this so its not poking through anything. Just want to look at it from several different angles. Okay, it looks pretty good. Let's turn off the transparency just to make sure everything looks good here. Okay so again, once we've got that positioned, we want to go and split it off into its own sub-tool. So let's go to Split Unmasked Points, and now we've got that as a separate sub-tool here.

So we just want to get rid of this curve, so I'm going to hold down Alt and draw a new curve through the existing curve. And that will delete it. Okay, so making shapes that are based on curves and lines can really be done quickly with the curve brushes. I use them all the time whenever I need a tube-like shape. 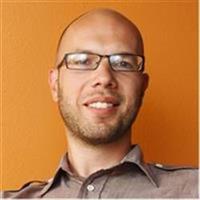 12/17/2013
Androids started appearing in science fiction over a hundred years ago, and have since evolved from robotic machines into more fully humanoid shapes. With modern 3D modeling tools like ZBrush, it's easier than ever to create a realistic looking android that bridges the divide between man (or woman) and machine. In this course, Ryan Kittleson teaches you how to model a female android with ZBrush's powerful modeling and sculpting tools. He shows how to start with a basic model and refine and stylize the anatomy. Then you'll learn how to concept machine-inspired parts like vents and wheels; create clean, hard edges; refine delicate areas like hands, feet, and joints; and add finishing details like seams. In the end, you'll put the android into an action pose and create a rendered turntable video that shows off your model.
Topics include: